Khiva is one of old cities of ancient Khorezm, the pearl of eastern middle age architecture. Khiva lies 25 kilometers south of present-day Urgench.

According to the legends Khiva was founded by a son of Noah, Shem when he dug a well in the middle of the desert. People who drank water of that well exclaimed as “Khey-vakh” which roughly means “sweet water.” And this area became a caravan destination because of merchants’ frequent visit. For the next thousand years the area was inhabited by several tribes that used the Amudarya river for irrigated agriculture.

According to the archeologists Khiva was founded in the 5th or 4th centuries B.C. As the first major structures were built, the city became known as trading post on the Silk Road.

Khiva is one of the largest and most ancient city centres of the Khoresm agricultural oasis, located in the southern delta of the Amu Darya River, south of the Aral Sea, in the west of the Central Asia. The Kyzyl-Kum desert begins here.

The city is convenient for tourists because almost all the monuments are concentrated within the ancient Ichan-Kala Fortress surrounded by inaccessible 10-m high walls.

If we trace back the history of Khiva, it becomes clear that most of the city’s monuments are relatively young in comparison with the monumental buildings of Bukhara and Samarkand. Many Khiva madrasahs, mosques, minarets and palaces belong to the epoch of the Khanate of Khiva, existed from the XVII to XX century. But this fact does not belittle at all the talent of architects who created the buildings unique in their beauty and architectural design.

In fact, Khiva can be done in one day. A quickie tour of the major monuments will give you an idea of the history and culture of the Khanate of Khiva. But if you want to feel the city’s spirit and enjoy its beauty in full, you will need much more time. 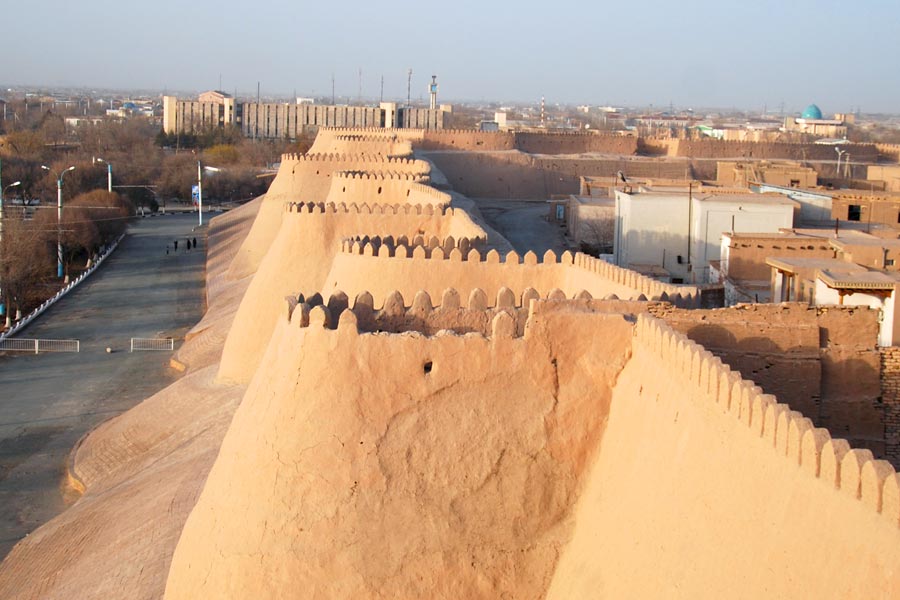 This is a historical part of the city - the fortress surrounded with a high cob wall, reaching up to 10 meters - with more than 60 monuments of different periods from the XVI to the early XX century preserved on its territory of 26 ha. What is more, the people, who still live there, are mainly engaged in traditional Uzbek crafts.

Today Ichan-Kala (Ichan Kala) is open-air museum. It is the old part of the city, surrounded with wall and turned into the State Historical Archaeological Museum. Here on the vast territory of 26 hectares the exotic image of the eastern city has been preserved. But the most striking is that Ichan-Kala is not a frozen museum city. It is a home for 300 families, mostly engaged in crafts. 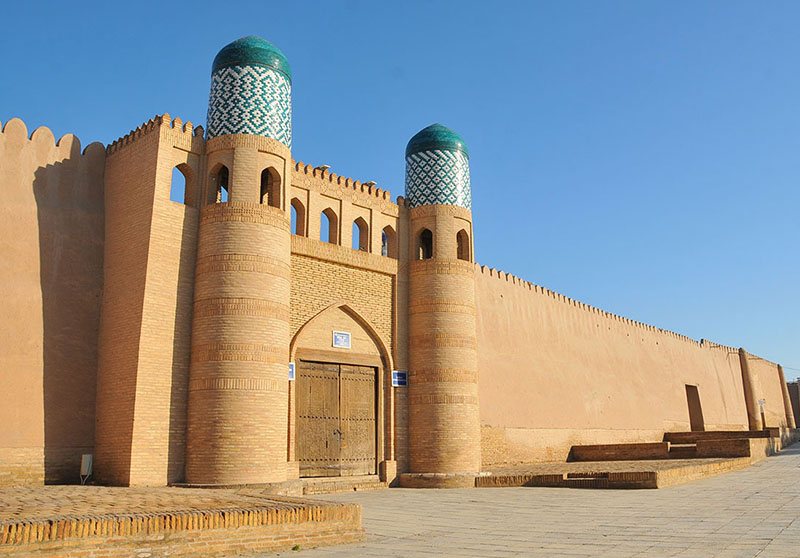 This complex was named "the Fortress in the Fortress", and it is here, at the Itchan-Kala western gate, where there once located a residence of Khivan khans. Once Kunya-Ark was fully built up, but a part of the buildings has not been preserved up to date. One of the most interesting places in the Kunya-Ark Fortress is its sightseeing platform, overlooking almost the entire city.

Opposite to Kunya-Ark, immediately outside the Ata-Darvaza western gate there is one of the main attractions of Khiva – the Muhammad Aminkhan Madrassah. This two-story building with total area of 72x60 meters is the largest madrasah not only in Khiva, but also in the whole Central Asia. Built in the middle of the XIX century, nowadays it houses a hotel, preserving nevertheless its historical image, with the rooms arranged in hudjrs which were inhabited by students a century ago.

Today it is impossible to imagine ancient Khiva without this monument of Asian architecture. The Kalta Minor Minaret became a true symbol of the city. Its dimensions are striking: the foundation goes to a depth of 15 meters, the diameter at the base is 14.5 meters and the height is 29 meters. But the height of this massive tower is only one-third of its design one, its construction was not completed, and there exist a lot of various legends connected with its suspension.

In the heart of the ancient Itchan-Kala Fortress, the large turquoise dome of the Pakhlavan Makhmud Mausoleum is outlined against the background of Khiva cob buildings. Pakhlavan Makhmud, the poet and strong man was a city’s hero, and after his death was consecrated a saint. 300 years later the modest mausoleum, the place of pilgrimage was developed into a whole complex that nowadays includes a khanaka, mosque and other buildings.

One of the unique sights of Khiva is the Juma Mosque. The official date of its construction is the end of the XVIII century, but studies showed that the mosque existed as early as the X century. The structure features a simple rectangular hall with the roof supported by 213 wooden pillars, each of which differs with its ornamental carvings. And here, there is an entrance to the minaret of Juma Mosque, with a magnificent view of Khiva.

Surprisingly, this complex, at first glance looks like a structures aged few hundred years old, but, in fact, it was built as recently as the beginning of the XX century. It includes a madrasah with a hall and 42 hudjrs (cells), and a 56.6-m high minaret. This is the Khiva’s highest minaret with the architecture resembling the example of the XIV century. 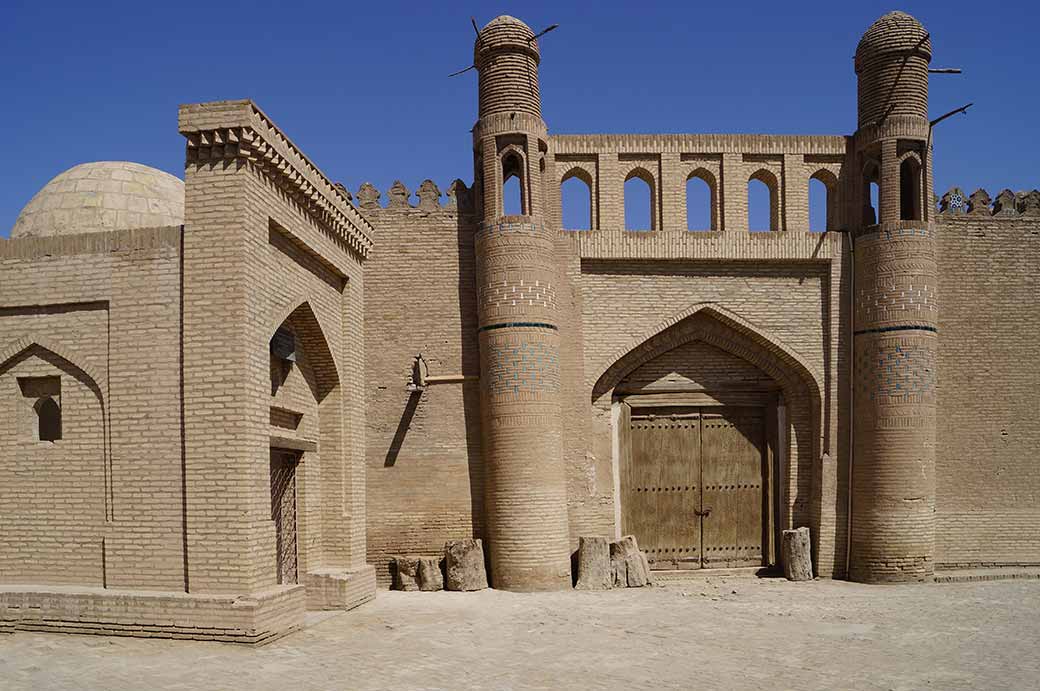 Tash Hovli is a beautiful palace of Khiva, where the walls, columns, ceilings are decorated with unique patterns. There, you can see the magnificent ganch and marble carving, and windows, protected with brass tracery grids. Luxury and elegance of the building are worth for Khivan khans to live in.